A 35-km trail suitable for all 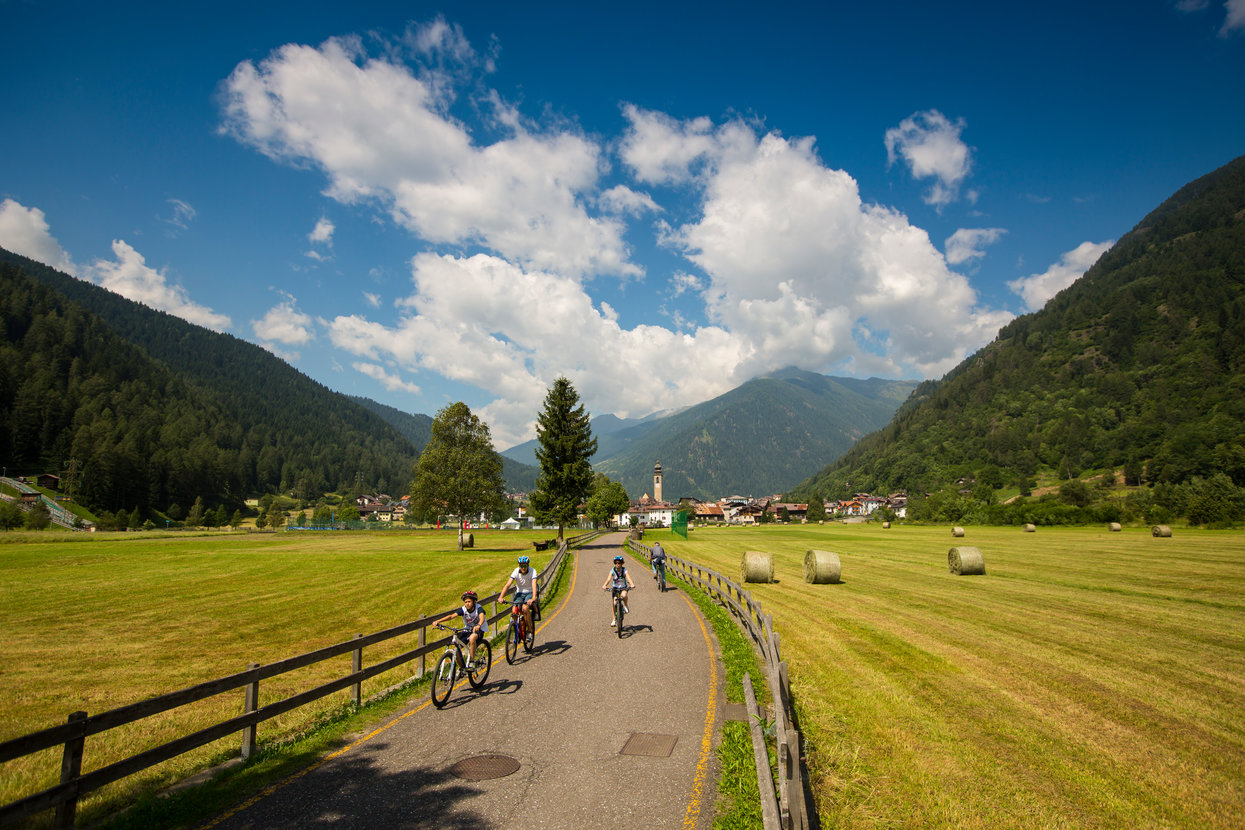 35 kilometres of fun, pedalling through the countryside, with the River Noce always by your side. Have you ever cycled along the Val di Sole cycle path?
From Cogolo di Peio, it will bring you to the lower valley and Mostizzolo: a must-try experience for all the family. The route is very easy, with a total difference in altitude of 565 metres downhill.

A totally relaxing experience, surrounded by the nature of Val di Sole, through the mown meadows in the upper valley, over cooling streams, through to the apple orchards in Caldes and Cavizzana.

Difficulty
Easy
Activity time
3:00
Durata in ore
Distance
33.6
Distance in km
Family-friendly cycle path that runs beside the River Noce in Val di Sole.
Running alongside the River Noce for almost all its length, the 35 km Val di Sole cycle path goes from Cogolo di Pejo to Mostizzolo, following the old roads between villages, on riverbanks and through the countryside. It is an easy route, covering a total difference in altitude of 565 metres.

Various routes are possible, using the Dolomiti Express train (Train-Bike service) and the Bici Bus, specifically equipped to carry bikes, to integrate routes or as an easy way to travel up from the valley bottom. Bikes are also available for hire from numerous places throughout the valley.

THE UPPER PART – FROM COGOLO TO OSSANA
The cycle path starts in the town of Cogolo, and after a short uphill stretch it leads down to the roughest part of the River Noce. Enjoy the inebriating majesty of its waters and the cool breeze they create.

THE CENTRAL PART – FROM OSSANA TO MALÈ
From Ossana to Mezzana: the route alternates level and slight downhill stretches, passing the pretty villages of Ossana and Pellizzano. Pedalling below Castel San Michele will definitely be an exciting experience.
From Mezzana to Daolasa: still downhill and you can stop off in Daolasa to see the Mountain Bike World Cup race venue or take a ride on the cable car up to 2000m asl, offering one of the best views of the Brenta Dolomites.
From Daolasa to Malè: probably the easiest part of the entire cycle path. Through green meadows it will be fun to drop down alongside the River Noce, observing young and old having fun as they enjoy rafting down the famous waters of this Solandro river.

THE LOWER PART – FROM MALÈ TO MOSTIZZOLO
From Malé, the main town in Val di Sole, downhill to Mostizzolo, with a few gentle climbs and descents through the apple orchards in the valley bottom. At the end of the cycle path, you can ride back the same way or use the Train + Bike service for your return.

Please note that the practicability of the itineraries in a mountain environment is strictly linked to the contingent conditions and is therefore influenced by natural phenomena, environmental changes and weather conditions. For this reason, the information contained in this page may have changed. Before leaving for a tour, make sure the path you will approach is still accessible by contacting the owner of the mountain hut, the alpine guides or the visitor centres of the nature parks, the info offices of the local tourist board.

he Val di Sole pedestrian and cycle path starts at the bridge in Mostizzolo (0.00 km) near the Trento-Malè railway station.
This bridge crosses a deep crevice, where the River Noce plungs into Lake Santa Giustina, a huge reservoir behind a very high dam. The first stretch of the valley, despite it not being the lowest part, through a landscape with more markedly Alpine characteristics, because it goes through a cool wood of fir trees. As you continue, the wood gradually opens out into countryside with fruit orchards and large meadows, through to the town of Malè, the main town in Val di Sole. Along this stretch of the cycle path, protected from traffic, you will come to Ponte Stori (2.6 km), perfect for a stop. Once you get to Cavizzana (5.8 km) you face 380 m uphill, but before you come to Cavizzana you go back down to the Noce, crossing vast orchards at the foot of the massive building that is Castel Caldes and Rocca di Samoclevo above it, overlooking the other side of the valley.
At the seventh kilometre you come to “le Contre”, with sports and recreational facilities. Continuing still on the right-hand bank of the River Noce, you will shortly come to where it converges with the River Rabbies, which flows down from Valle di Rabbies into the Noce, one kilometre below Malè. Staying alongside the river, you go past Malè, the main town in the Val di Sole, which stands on a higher piece of ground. In this way the cycle path does not go through the town, which is however worth a visit to admire certain characteristic buildings and take a trip to the Museum of val di Sole Civilisation. The cycle path continues through the vast grassy plains that lead to the town of Dimaro (15.1 km) at the start of Val Meledrio, and the beginning of the road to Madonna di Campiglio.
For a long stretch it runs alongside the Trento-Malè railway, then through Dimaro, still alongside the River Noce, first on the right-hand and then the left-hand bank, to the town of Mestriago. Continuing to and passing Piano, you will come back to the riverbank, going past Mezzana at the slalom canoe stadium and through to the sports centre. Now you pedal easily along the path through to Pellizzano (25 km) where the new Bicigrill stands. On the level, you will approach Ossana and the Castello di San Michele, visible even from afar. Then it’s up the River Vermigliana for a short stretch near the campsite and across it over the bridge that leads on to Fucine (28.2 km) the crossroads between the Valle di Sole and the Valle di Peio.
At this point you are 985 metres above sea level. Once past Fucine you continue in a north-westerly direction where the cycle path enters Valle di Peio, at first almost on the level to Forno di Novale (29.85 km) and then uphill towards Cogolo. The valley is narrower here and you have to cross the Noce three times, the second time on the road bridge leading to Comasine, involving a short but steep stretch. Continuing upwards you will finally see Cogolo, which you will reach after a short steep downhill ride and a bridge that leads to the main road right at the start of the town (34.11 km).

How to get there

From Bergamo-Brescia: take the S.S. 42 Tonale state road. From Bologna-Verona and from Brennero: A22 Brennero motorway, come off at Trento Nord if arriving from the south, or at San Michele all'Adige if coming from the North. Follow signs for Cles and Val di Non along the SS43 and, after Cles, pick up the SS42 and follow signs for Passo del Tonale and Val di Sole.

Travel with your bike

Not feeling very fit and worried that you might not be able to last the distance? Don’t worry! The Val di Sole Cycle and Pedestrian Path has a Bike Train and Bike Bus service that takes bikes on board together with… cyclists!
A handy way to travel back to your starting point. 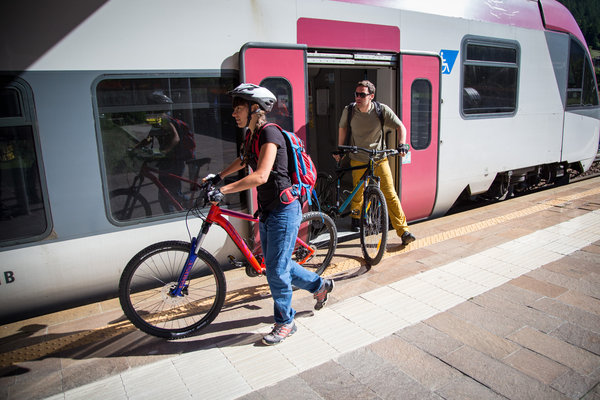 Lots of options to turn it into an unforgettable adventure

Believe us, this is not just a bike ride, it’s an all-round outdoor experience: nature, sport, culture and, why not, food too.
Lots of useful services to make your ride along the cycle path even better and lots of interesting things to see and do. Why not stop and visit Castel San Michele or Castel Caldes? And how about a visit to the MMape Bee Museum?

There is so much to discover, all on… 2 wheels!

And so many ingredients to make your day out unforgettable—check them out below!

E-bike charging points, little fountains with spring water and lots of useful, interesting information: check out the 13 Noce Boxes along the way. 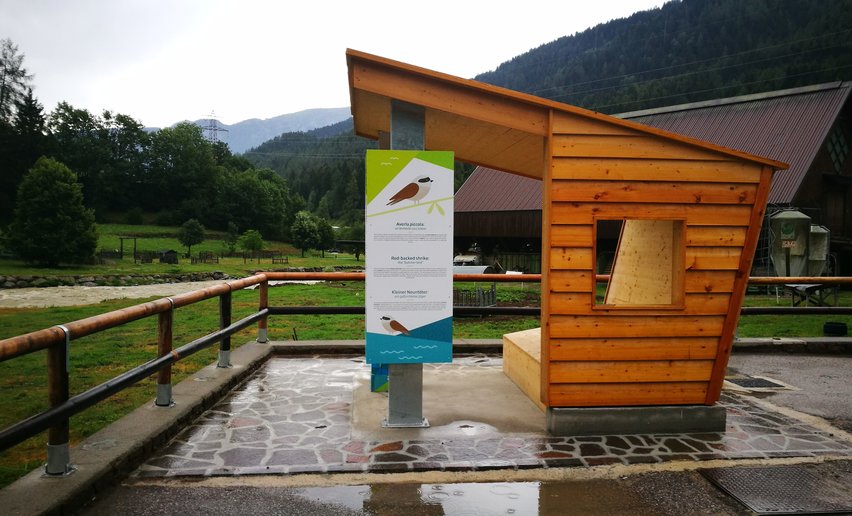 Need to charge your own batteries? The Bike Grill on the cycle path in Pellizzano has everything you need for a tasty boost of energy. 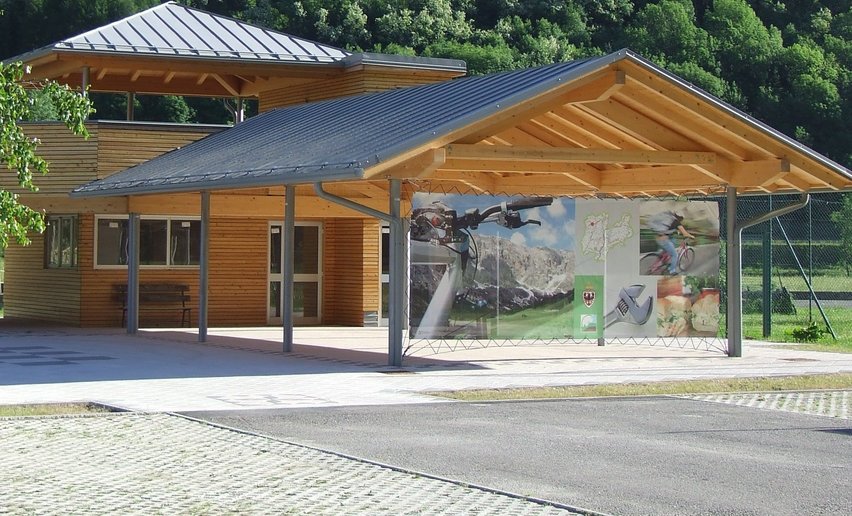 Art, culture, traditions: discover Val di Sole from your bike saddle. Stop for a break and fill up on wonderful sights, with castles, museums and lots more. 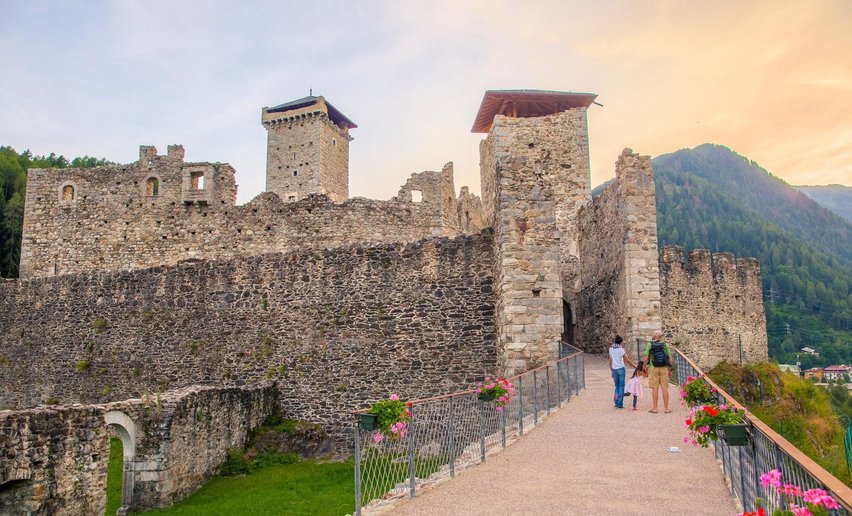