Val di Sole is a land of heroes, people who have made unusual, courageous choices and who, every day, quite simply do extraordinary things. Ordinary people who choose to live in nature, respectfully and lovingly. Artists, farmers, and writers… there are so many different sides to the people who live in Val di Sole. Here are a few of them. 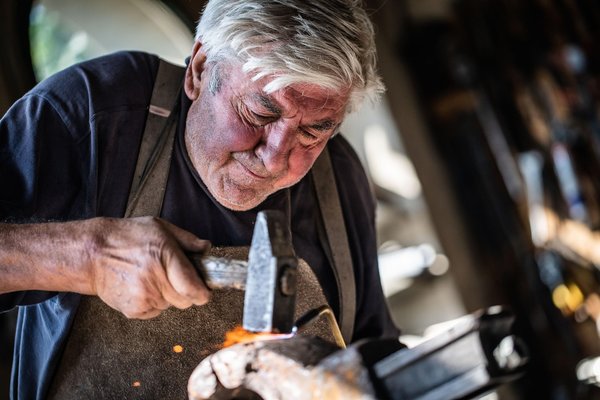 FATHER AND SON: ARTISTS IN IRON

Luciano and Ivan Zanoni are father and son. They were both born and still live in Caldes. Their family has always worked iron, producing farming tools and carts. Luciano was the first to break with family tradition and become an artisan. Even as a little boy, he had always helped his father heat the iron, beat it and cut it, but after his father died, he became the family breadwinner and they moved to Alto Adige. However, in 1979, his friend Paolo Vallorz, a famous painter originally from Caldes who had moved to Paris, organised a party in Le Contre in Caldes and, for the occasion, Luciano made some apples and pears using iron. This marked the start of the Zanoni family's artistic journey. After these first apples and pears, Luciano began to carefully study the vegetable garden. These were the years when Luciano matured as an artist. Popularity came when Luciano Zanoni sculpted an olive tree for Bill Gates’ villa in Seattle. Like his father, son Ivan also developed a passion for working with iron, and as young boy he learnt the techniques involved. Unlike his father though, Ivan drew inspiration from the world of animals. They thank Val di Sole, the land that gave them their inspiration, by celebrating it with their creations, like the Sundial in Monclassico. This is their way of recognising the valley’s fundamental influence in their story. 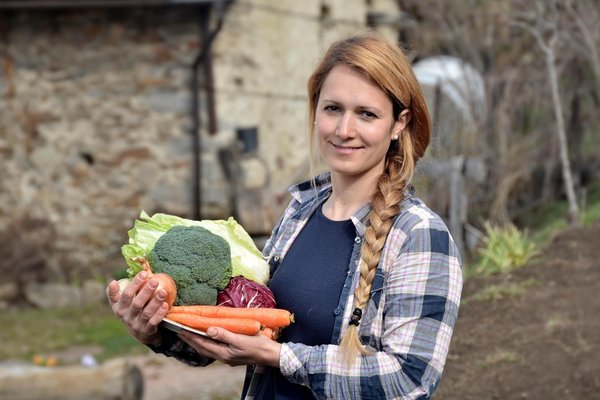 Patrizia Pedergnana is a young businesswoman who grows vegetables for a living. In Val di Pejo, at 1000 metres asl, she is the boss at Orticoltura Pedergnana, an organic farm that produces typical produce like white cabbage and mountain artichokes, and traditional seeds from Val di Sole (such as purple beans and red corn), for which she has become the guardian responsible for safeguarding agricultural biodiversity. In 2019, Patrizia’s idea was chosen by the town of Ossana in response to a call for proposals for a new-concept market, plastic-free and with low environmental impact. Her market opened its doors in Fucine, a small village in Ossana, selling just specialities produced within a range of 110 kilometres, to strengthen the local economy and short supply chains. In her agri-market, called La Dispensa, Patrizia sells foodstuffs without any plastic packaging, preferring either glass or bags made from paper, fabric or other reusable materials. What’s more, Patrizia would like to see this new market become a point of reference for the local community, offering free wifi and providing useful public services like, for example, the possibility of booking appointments with medical specialists, printing of medical test results, and distribution of medicines sent by nearby pharmacies.

Eulalia Panizza is a writer, naturopath and great expert in mountains herbs, flowers, roots and plants. She lives in Vermiglio, in a delightful little mountain house built from wood and local stone. She has neither radio nor television and everything she knows, as she says, she has been taught by the woods and meadows in the mountains that have been her world since she was a little girl. The country lore of her parents and the poverty that used to force mountain dwellers to use everything that nature around them provided in order to survive, formed the basis for her learning.
Today, Eulalia teaches and writes books and many local youngsters follow her lessons on how to recognise and use the mountain flora. Eulalia is an institution in upper Val di Sole. Teaching at her mountain school, Raggio di Sole, takes place in Vermiglio, in the shadow of the Presanella.  Here she imparts those lessons in self-production, so vital during the post-war period for the survival of families living in the mountains: how to make soap, turn nettle fibre into fabric, and brew beer are just some of the discoveries to be made. 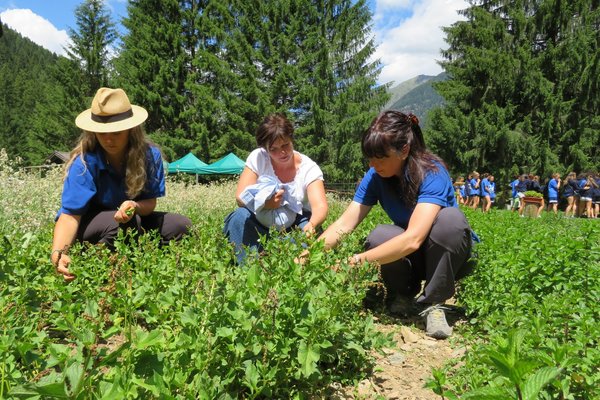 A radical life change after 20 years as a beautician. With her company divided between upper Val di Sole and Val di Pejo, Olga Casanova today is an institution on a European level for natural cosmetics. The ingredients for her organically certified products include arnica flowers, thyme, calendula and, above all, edelweiss. Not many know that this latter plant is miraculous against free radicals. Olga’s strength? Her passion, great willpower, love for her land and a desire to turn raw materials from the Solandro meadows into an asset for sustainable development.
The organically certified agricultural company run by Olga Casanova is located in the green of Val di Sole, in Stelvio National Park. It was set up to promote this territory, agriculture, and tourism in the Val di Sole and to ensure wellbeing with her natural organic products and cosmetics, a guarantee of quality. The particular nature of the cosmetics that Olga creates using the plants she cultivates and their certified quality have led her company to become an excellence in the sector of natural organic cosmetics. The feather in her productive cap? Her edelweiss, arnica and thyme, and calendula creams. 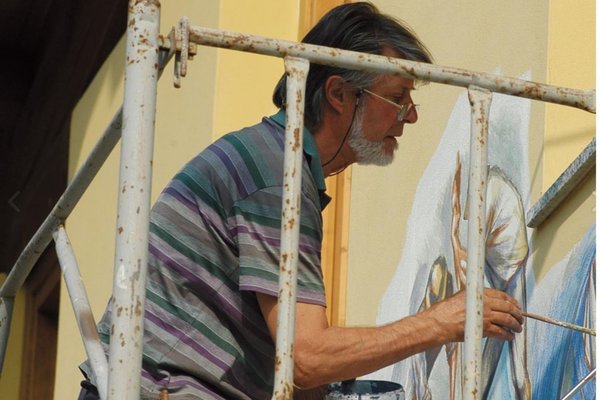 Livio and Giorgio Conta are father and son, artists with a workshop in Monclassico and their home, next door to the laboratory where their creations take shape, is full of statues, sculptures in wood and bronze, and paintings that display an amazing variety of subjects, versatility of materials, and complexity of messages.
A story that stems from the same family talent, but which branches out into different personalities and techniques. Livio was born in Monclassico on 28 January 1939 and he went to the wood sculpting schools in Val di Sole and then lived in Paris, in Spain, in Pietrasanta in the province of Carrara and finally came back to Val di Sole, where he set up his own business. His choice to remain out on the edge, in the valley of his birth, conditioned his contacts with artistic currents, but also helped him. Here in his father’s home he was in fact able to give free rein to his creativity. The sacrifices made were many, but, against Livio’s wishes, his son Giorgio chose to follow in his father’s footsteps. He studied languages at high school and then spent four years at the sculpture school in Ortisei. Father and son now share the workshop, but their creations follow different directions. Giorgio, in fact, is a sculptor from the past. One of his creations is the huge bronze statue that stands on the crossroads of the SS43 state road in the Val di Non, welcoming you to the town of Segno, a piece that the two Solandro artists dedicated to Father Eusebio Chini. Curious? If you want to see work by these artists you can visit their workshop in Monclassico in the old family home opposite the Sasso Rosso.

THE FIRST ITALIAN WOMAN IN SPACE

Born in Milan, Samantha was raised in Malè, where she spent her early years, studying  first in Bolzano and then in Trento, and graduating from the Technical University of Munich with a degree in Mechanical Engineering. In 2001, she was admitted to the Aeronautic Academy in Pozzuoli, graduating in 2005 as a lieutenant in the Italian Air Force with a degree in aeronautical sciences. Following a specialisation course in the United States, she started a brilliant career as a fighter pilot in the Italian Air Force. Her big moment came in May 2009 when she was selected as an astronaut by the European Space Agency. With her participation in the ISS Expeditions 42 and 43, the Futura Mission, she became the first Italian woman in space. 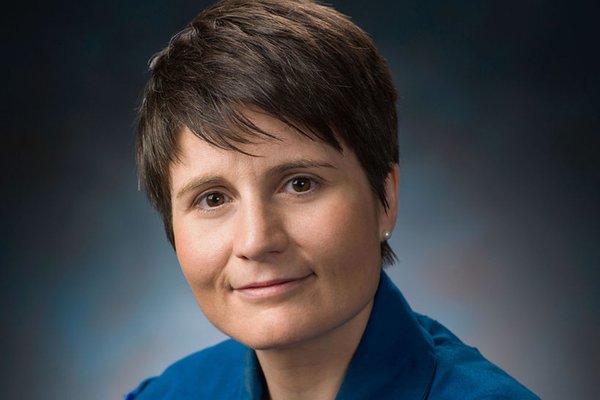